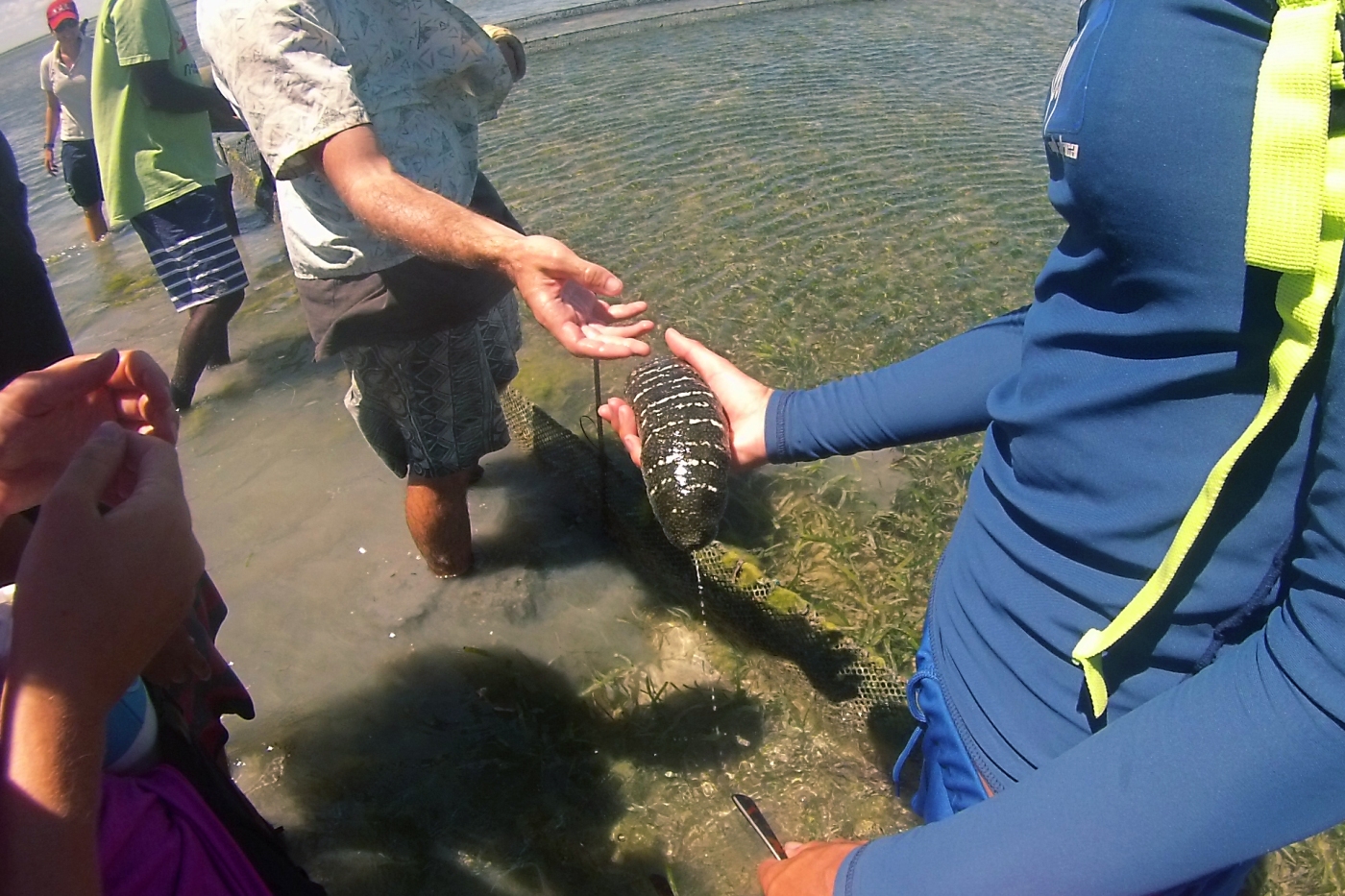 During our time as volunteers with Blue Ventures in Madagascar, we got to help out on many of their projects. One weekend, we travelled south by boat, to the coastal village of Tampolove, in the less than reassuringly named Assassins Bay. Blue Ventures has been piloting a sea cucumber farm here since 2009. The idea is to give the locals an alternative livelihood to fishing, to try and rejuvenate the coral reef and prevent overfishing. The programme has proved popular with the locals. The sea cucumbers are sold to the Chinese market where they are a delicacy, and can yield a healthy profit for the farmers.

Once a month, at spring tide, the farmers gather the sea cucumbers from two pens to weigh, measure and count them to monitor their progress. And that’s what we were here to help with.

That Saturday evening we were told to meet at the village hall at 11:45pm. After a two hour nap, feeling groggy, we emerged in the pitch black night. During the day, sea cucumbers burrow in the sand to stay cool, and at night they tend to come out onto the sand, so they are much easier to find in the dark. We aimed for low tide, around midnight on this night, so the water would only be ankle deep in the pens. We grabbed our waterproof torches, our wetsuit boots, and wadded out to the designated areas.

We had already been out at low tide during the day so that we could see the project and have an idea of what to expect later that night.

The boots we wore were really important, as we were likely to encounter a few other creatures in the night. The most dangerous would be a stone fish, that you can read more about in my last blog post. They showed us one the farmers had caught only two days before, and I started to feel less happy about coming back out in the dark. Other things to avoid were sea urchins, and a strange type of nudibranch, that unfortunately also looked like a stone. It’s harmless, but if you knock it, it will secret a pink liquid that disperses in the water. I’m really glad we were told about this, as it happened a couple of times and looked frighteningly like blood.

I had never seen, let alone touched a sea cucumber before this night, and tonight we were expected to find 300. We didn’t see any for the first five minute, and we were starting to think we must be missing them. Is that shape in the sand one? Nope, just my footprint. All I could see were crabs ducking in their holes and juvenile lionfish hovering suspiciously. Eventually we spotted one, then 10 and then more and more. The ones we were monitoring were young so were only about 10 centimetres long at most. They are funny creatures, full of water and when you pick them up they empty themselves. Their skin feels like that of a snake, if a bit more rough. It’s hard to believe that they are animals moving about, cleaning sand, and not vegetables.

We ended the search at 210 sea cucumbers. It was good enough to get an overall idea of their progress, and happily, they seemed to be doing well. Blue Ventures staff have, in recent years, worked out the right number of sea cucumbers for a given area, so that they can thrive and not suffer from overcrowding. An important find for the efficiency of this programme.

Looking over at the team working in the second pen, the sight was incredible. All I could see was the bright stars above and a few torches moving on the water. The rest was pitch black, like out of a dream sequence in a surealist film.

Released of our duties, we wadded back towards the beach. On our way we spotted a beautiful octopus, only about a meter long, clearly lost in the shallow water. It was coiling it’s tentacles around the small obstacles on the sea bed, trying to find its way. We decided our torch lights might be confusing it more, so we left it to find its way, and  we gladly went back to bed.